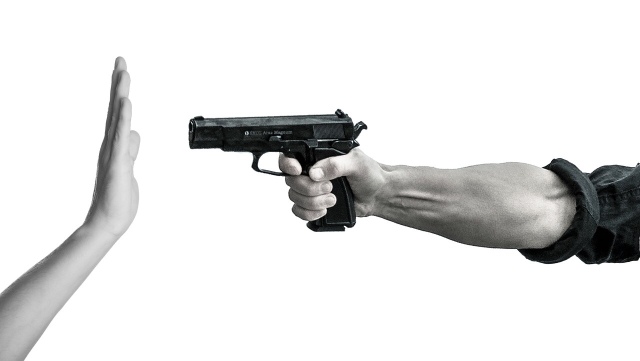 MARK 7:18-23: “So He said to them, “Are you thus without understanding also? Do you not perceive that whatever enters a man from outside cannot defile him, because it does not enter his heart but his stomach, and is eliminated, thus purifying all foods?” And He said, “What comes out of a man, that defiles a man. For from within, out of the heart of men, proceed evil thoughts, adulteries, fornications, murders, thefts, covetousness, wickedness, deceit, lewdness, an evil eye, blasphemy, pride, foolishness. All these evil things come from within and defile a man.” NKJV

OBSERVATION: On Sunday, December 29, 2019, there was another tragic shooting at a Church of Christ in White Settlement, Texas. I was visiting my sister and her family only a few short miles from this location. The reality is – it could have been any church! And, in the midst of the sorrow and confusion, it did not take long for the political pundits to begin crying for solutions, including more gun control laws.

Now, let me make it very clear, I am not a gun owner. I don’t like guns. The closest thing I have to a gun is a Red Rider BB Gun that was given to me as a souvenir. I have stayed outside of the fray of this discussion, because, to be honest, I think there are more critical things to discuss. Yet, as I read these verses today I was reminded by the words of Jesus,

The context of Jesus’ explanation of His teaching to His disciples was the commandments of men that were being taught by the religious rulers. They had taken God’s dietary laws, which were given for the benefit of man, and made them the end rather than the means. They viewed food as the most important part of the command. Jesus viewed the heart as the central issue.

Jesus made it very clear. Food goes into the stomach and is eventually eliminated. Therefore, food is really benign. Whereas, what comes out of the heart is what truly defiles a man.

It is true – overeating and guns can kill. Yet, they can only do so in the hands of a man or a woman who has uncontrolled emotions and sin in their heart. Jesus did not blame swords or spears for the deaths that were occurring in his day.

During the Welsh Revival of 1900-1905, the impact of men and women turning in faith to Jesus Christ had a dramatic impact on crime. Larry Brown, in his paper entitled The Welsh Revival And Other Revivals Worldwide, 1900-1905 writes;

In White Settlement Texas we witnessed the difference between two hearts. There was the heart of the shooter who intended to kill and destroy as many lives as he possibly could. Then, there was the heart of a church member, who laid his life on the line to protect others and shot the man who intended evil, keeping a terrible event from becoming an even more horrific event. Three people died in this church. This was three people too many. Yet, it was not a gun that killed the two innocent men, but a heart that was filled and controlled by evil.

The church needs to pray for revival. The church needs to preach the Gospel. The church needs to call men and women to repentance. If the pulpits of our land are only filled with “how to” sermons, and avoid the difficult issues of the day, we will never see revival. Violence, hatred, murder, and moral decline will be the norm of the day. Yet, when hearts are changed society is changed too! And, it is only a changed heart that can solve the issue of violence in our day. You could confiscate all the guns from all the law abiding people in the land and it would not remove them from the hands of unregenerate hearts that intend to do evil!

The Bible and the Gospel are our greatest weapons against the sin and violence that is so prevalent in our land. Just as evil regimes have taken the guns away from law abiding citizens, so the enemy has taken the Bible, prayer, and the Gospel away from our churches and our public square. The church seems to be more interested in entertaining than saving, pacifying than prophesying, and accommodating than calling for repentance.

Jesus was not crucified on a cross because He fed the 5000, healed the sick, or cast out demons. Jesus was crucified because He spoke the truth and uncovered the hypocrisy of His day.

Are we willing to do the same?

Bring revival to my heart – and to this land!

Kirk L. Zehnder is the Founder of Resurrection Christian Outreach. RCO is a ministry that promotes the growth and vitality of the local church through speaking engagements, seminars, various media tools, and written curriculum and books. This ministry was started over 35 years ago by Kirk as a means to strengthen the church that he was pastoring. It grew as Kirk began to share these tools with other churches. Today many of the materials are being used by local churches both nationally and internationally. Kirk's Devotional Journal is a result of struggling with Bible reading programs that never seemed to work. Kirk feels the Lord helped him discover an easy-to-follow program to Read, Reflect, Pray, and Journal through the Bible in one year. This program is called L.I.F.E. Unlike other programs there are no dates to follow. You can miss a day and still complete your reading. You never feel like the dates and verses you missed are chasing you. You are free to enjoy your daily Biblical journey and listen to the voice of The Lord. For more information on the L.I.F.E. plan, send an email to rcoutreach@aol.com. Kirk is also available for speaking engagements, seminars, and retreats. With over 40 years of professional business and pastoral ministry experience, Kirk brings a unique combination of practical wisdom, humor, and Biblical insight. If you would like Kirk to speak at your church, school, or ministry, please send an email to rcoutreach@aol.com and we will get back to you as soon as possible to discuss your opportunity.
View all posts by Kirk's Devotional Journal →
This entry was posted in Mark. Bookmark the permalink.