MARBLES IN THE MUD… 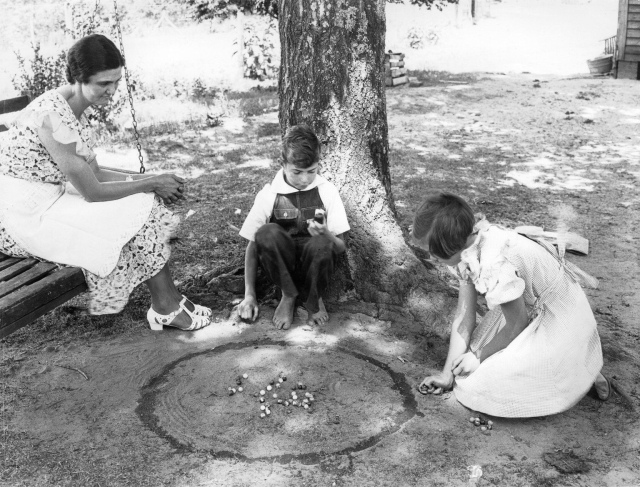 LUKE 14:21-24: “So that servant came and reported these things to his master. Then the master of the house, being angry, said to his servant, ‘Go out quickly into the streets and lanes of the city, and bring in here the poor and the maimed and the lame and the blind.’ And the servant said, ‘Master, it is done as you commanded, and still there is room.’ Then the master said to the servant, ‘Go out into the highways and hedges, and compel them to come in, that my house may be filled. For I say to you that none of those men who were invited shall taste my supper.’ ” NKJV

OBSERVATION: Is the Church actively going into the highway and hedges – compelling the lost to come to Christ?

Once there was a boy who loved marbles. He loved to collect them, trade them, and play in marble tournaments with other children. He dreamed of having the best marble collection in his entire town. Marbles were really important to him!

There was a time when marbles were really important to everyone in the town. At one time there was a marble factory in the center of town and many people worked at this marble factory. However, as the marble craze subsided, the old factory eventually closed down. The remaining marbles were thrown into an old field and over the years they were covered with mud and weeds.

There were several marble playing centers in town. The young boy who loved his marbles would visit each one to try his skill and see if he could add to his marble collection. Then one day he decided that he would start a marble tournament himself. This would be the best marble tournament in town! Everyone would want to play marbles at his tournament!

Each day as he made his way to the center of town, where the tournaments were played, he would pass by the old abandoned marble factory. In fact, all the marble players had to pass by this old factory. It was a constant reminder to them of their former glory days and they were determined never to let their marbles get covered in mud and weeds like the ones in the abandoned field.

The boy set up his tournament circle and put up a sign that read – “The best marble tournament in town!” He waited for other tournament players to join him. A few did, but only a few. So the boy thought – “How can I attract more players?” Each day as he traveled to the tournament grounds, and as he passed by the old field of the abandoned marble factory, he mused over how he could attract more players.

Most tournaments just drew a circle in the sand. The boy thought – “What if I made a circle out of gleaming stainless steel? Surely that would attract some more players!” And it did. A few more players left some of the other tournaments in town to play in this new circle of gleaming brightness.

The next day, as the boy passed by the old abandoned marble factory, with all the discarded marbles covered in mud and weeds, he thought – “What if I added some popular music to my tournament? Surely then more players would join my game!” And, so he did. A few more players left the other tournaments in town and joined his tournament.

Yet, something was wrong. The boy had hoped that more people in town would become interested in playing marbles. The more he tried he realized that the number of players did not increase. And, the number of marbles did not grow. It was the same players with the same marbles simply switching from one game to the other. If only he could find some more marbles to share with people who had never played before!

Where in the world could he find more marbles?

Kirk L. Zehnder is the Founder of Resurrection Christian Outreach. RCO is a ministry that promotes the growth and vitality of the local church through speaking engagements, seminars, various media tools, and written curriculum and books. This ministry was started over 35 years ago by Kirk as a means to strengthen the church that he was pastoring. It grew as Kirk began to share these tools with other churches. Today many of the materials are being used by local churches both nationally and internationally. Kirk's Devotional Journal is a result of struggling with Bible reading programs that never seemed to work. Kirk feels the Lord helped him discover an easy-to-follow program to Read, Reflect, Pray, and Journal through the Bible in one year. This program is called L.I.F.E. Unlike other programs there are no dates to follow. You can miss a day and still complete your reading. You never feel like the dates and verses you missed are chasing you. You are free to enjoy your daily Biblical journey and listen to the voice of The Lord. For more information on the L.I.F.E. plan, send an email to rcoutreach@aol.com. Kirk is also available for speaking engagements, seminars, and retreats. With over 40 years of professional business and pastoral ministry experience, Kirk brings a unique combination of practical wisdom, humor, and Biblical insight. If you would like Kirk to speak at your church, school, or ministry, please send an email to rcoutreach@aol.com and we will get back to you as soon as possible to discuss your opportunity.
View all posts by Kirk's Devotional Journal →
This entry was posted in Luke. Bookmark the permalink.